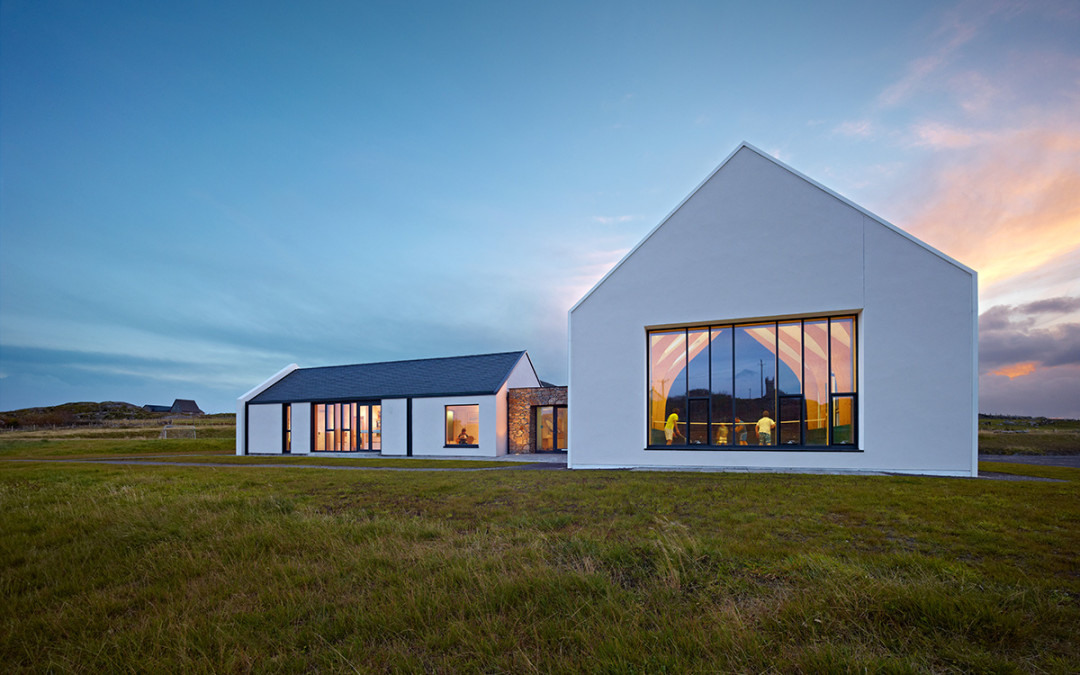 George McConnachie lives and works on one of Scotland’s most beautiful islands, the Isle of Coll. As Development Manager for Development Coll (the community company set up in 2006 to promote the sustainable development of the island) he works from An Cridhe, the wonderful purpose-built community centre at Arinagour, which opened in 2012 and with its adjacent bunkhouse lies at the heart of the island community. He also happens to be one of The Touring Network’s most active arts promoters but as we discovered when we spoke to him earlier this year, this isn’t a role he ever expected to have.

Coll lies just north west of the Isle of Mull and is famous for its many sandy beaches and outstanding natural environment. Not being on an ‘island hopping’ route, Coll doesn’t perhaps have as high a profile as some other Hebridean islands. However at some thirteen miles long it has a population of 220 (and growing), a thriving primary school and is a top destination for wild life enthusiasts. Walking trails are mostly unmarked and are free from car parks telling you where to start or finish. Even at the height of summer you can find yourself the only person on any one of the island’s many unspoiled, golden beaches.

It’s no surprise then that when George first came to the island in 2012 to take up the post with Development Coll he didn’t quite know what to expect. He had spent some time as a tour guide in the Highlands but had never visited Coll and nor did he know anyone that had ever been there. Having been brought up near Edinburgh, he imagined a remote, quiet place where he would be living off the land and having to find ways to pass the time. As George explains, nothing could have been further from the truth.

‘I’ve come to a place where there’s a really vibrant community and there’s a real energy to do things. For that reason I do things that I never did when I was back on the mainland – I played rugby for the first time when I moved to Coll, I started playing hockey and got back into badminton.  I now take part in the annual pantomime. I’ve done comedy sketches for our easter concert… it’s not something that I thought I’d be doing before! It’s been a revelation coming here and I really feel like I’m part of a community.’

An Cridhe ( literally meaning The Heart) is a multi-functional community centre, a place where people can make things happen. Along with Coll Bunkhouse it is a priority project for Development Coll and the main focus of George’s work. It has to cater for many needs and providing a programme of arts events is only one. For George and the staff at An Cridhe the process of putting on a theatre production or concert was initially quite daunting. George’s background is in marketing, tourism and social enterprise with no experience of arts programming at all, and it wasn’t something he was required to do initially when he joined Development Coll as Business Development Officer in 2012.

‘The promotion of the arts was something I just had to learn, it wasn’t a key function of my work and still isn’t, it’s part of it. That’s why I’ve been keen to engage with The Touring Network. It’s been great for me to meet other like-minded folk and to see how we can do things without having experience of having done it before.’

One thing George learned very quickly is that as most of the audience for each event, especially in winter months, is made up of island residents rather than visitors, the programme has to be spread out and varied. A number of events have been programmed with the support of The Touring Network, including Waves, HeLa, Inspector Norse and The War of Buttons.  An Cridhe also hosts a nine day residency and concert series for young musicians from the Tunnell Trust, holds regular film screenings and touring concerts, and is the hub for festivals including the Coll Bird Festival in May and the Basking Shark Festival in August.

In speaking with George it becomes clear that the overall relationship between growth and conservation is a challenging but crucial one. Everyone on the island wants to see Coll as a thriving, sustainable community for residents and visitors alike but not at the cost of what makes it so special in the first place.

‘We’re very conscious of what we’ve got on Coll, the natural environment, the fact that people come to Coll to get away from the hustle and bustle. We like this place for what it is, where things happen at their own pace.’

At The Touring Network we’re thrilled to be part of it, and look forward to working with George and the people of Coll for a long time to come.