A Sharing with Eigg 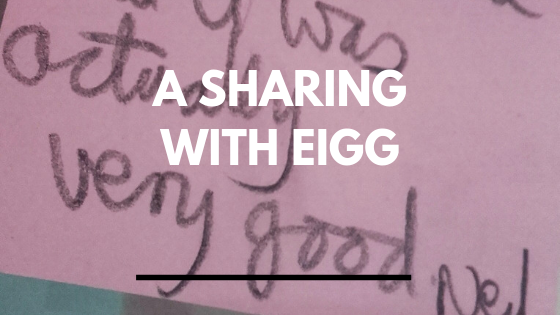 Lisa breaks down what made Vanishing Point’s Sharing of “The Dark Carnival: Unplugged” a success

Written by – Lisa Baxter, The Experience Business in Aug 2018

Vanishing Point (VP) and Lucy Conway (Eigg’s promoter) decided that the location for the sharing would be in the Tea Rooms on a summer’s eve in August. The event would take place after the dinner sitting. The day trippers would have left the island by then, leaving mostly locals.

The aims of the event, as with all the sharings, were:

To build relationships with the local community,

To connect them to the themes of the work,

To raise awareness of, and build anticipation around, the production,

To obtain meaningful audience feedback to inform the creative process.

VP’s first visit hadn’t gone well but an impromptu sing–along on the beach with Nan (the island’s teacher and a performer with a one-woman Kate Bush show) led to the idea of her taking part in the next sharing. The thinking was that by having a trusted member of the community as part of the event, more people would be interested in coming along.

The idea worked. The tea room was packed. From young children and barking dogs, to local artists, workers and a smattering of tourists, it was standing room only. 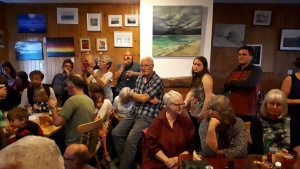 During the preceding days, Biff, Matt and Nan had holed themselves up in the community centre and rehearsed. They wanted to give the audience a really good artistic experience, not just a scratch performance.

The intention was to keep the whole experience warm, informal and intimate.  It was all three. No set. No stage. No lighting. Just three stools, three music stands and three performers: Biff with his accordion, dressed in a sharp suit; Nan, a familiar face in an unfamiliar context, the audience curious to see how she’d do; and Matt, a little nervous at first, casual, script in hand … obviously not a natural performer, but authentically sharing his material. His vulnerability was palpable. 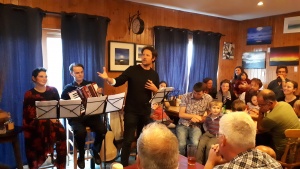 The event was short, forty five minutes, and it captivated the audience from beginning to end. The islanders clearly enjoyed watching Nan perform, perhaps for the very first time.

Biff was mesmerising as he sang his hauntingly beautiful songs. Actually, not just ‘sang’. He performed with his whole body, as if possessed by the music. Nan too is a physical performer and a great singer. Putting them together worked. Lost in the songs, they were neither specific characters nor themselves. Extremely watchable and beguiling, they had the audience in the palm of their hands.

Matt was hesitant at first, but the power of his words held everyone’s attention; dark, funny, irreverent and surprising, it was clearly ‘art’, but in a language everyone understood.  More than that, he wasn’t an ‘actor’. These were his words and I think there was something magical about the audience being captivated by those words delivered by the person who produced them. The source.

Then … more magic, as some of the women in the room began singing with Biff, a ghostly choir beating out a tinkling rhythm with spoons on their drinks glasses.

Biff had worked with them in secret after attending one of their singing sessions. The experience elevated the whole event away from performing ‘to’, to performing ‘with’, underpinned by Nan’s involvement. It is my belief that something undefinable may have been forged there – a connection that might possibly be more enduring than the usual contract between actor and audience. That the cast stayed behind and chatted and drank with members of the audience may have strengthened this. Less ‘us and them’.

This was not an easy experience for Matt who felt uncomfortable about a sharing process that didn’t align with his director-led approach. Listening and responding to audiences were not his thing. We needed to respect this, and so audiences were not invited to formally dialogue with VP. The event became more a space for serendipity in the hope that something might emerge that would inform Matt’s thinking.

Matt admitted later that it did.

However, he wasn’t off the hook. Whilst it’s important to honour the artistic process and recognise the vulnerability of those taking part in a public sharing, Kate (the animateur) and I still wanted to create an opportunity for feedback. We mounted a wiki-wall outside of the tea room – so as not to tamper with the honesty of the sharing – with three simple questions for people to comment on post-event, should they want to. 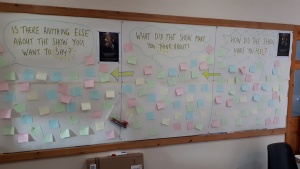 The responses were warm, positive and thoughtful, surfacing a range of responses that evidenced the depth impact on the audience’s thoughts and feelings.

People engaged positively with the subject of death. Some were moved to think about death differently; it became somehow ‘lighter’. The premise of a world beneath the soil seems to have captured their imagination, both as a means of avoiding the subject of ‘actual death’, and as a way of explaining death with children.

Other responses evidenced a high degree of captivation and emotional engagement. Some were surprised that so much could be achieved with so little. Nan’s involvement and the opportunty to participate in the performance were also appreciated.

The team’s favourite feedback, by far, was this (below) from Neil. A sentiment echoed by my taxi driver the next day (who wasn’t called Neil), who remarked how surprisingly good the performance was. Something different, unusual, interesting. 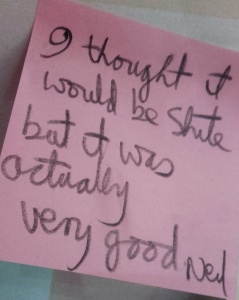 What is clear is that audience experience was enjoyable, deep, visceral and thought-provoking experience. Expectations have been set and VP has a lot to live up to by setting the bar very, VERY high. Furthermore, the audience has now experienced that initial soft shock of death-done-differently. So what next?

It wasn’t until the following month, at a Milestone meeting in Forres, that we learnt how formative this experience had been for Matt. It shifted his perception of The Dark Carnival Unplugged from a scaled-down version of the original to … well, let’s see.

I was struck with a number of things about this event that I believe have taken VP beyond their comfort zone (‘stretch’ is a founding ethos of the programme) and created useful examples of how to positively engage rural communities in sharing events: