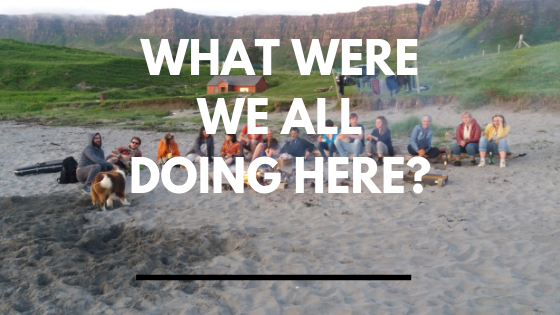 Biff shares how his the first visit to Eigg went.

“what were we all doing here?”

“it was a long way to come for a rehearsal!”

“We didn’t want to presume or act like we were on Eigg to show off!”

Read how it all ended and what fruits were born out of the unknown!

I remember being on the ferry, approaching the Isle of Eigg for the first time. It was a humid, muggy day and a heat haze lay over the water. The island itself gradually revealed itself and I felt like I was entering another world. It reminded me of Dr Moreau’s Island and I wondered what I would find there.

A first glimpse of Eigg 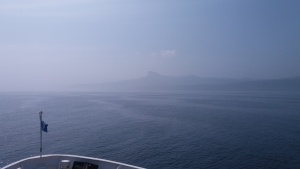 Our team enjoyed valuable time in our lodgings working on our project together. Matt, actors Pauline Goldsmith and Robbie Jack and myself worked together for the first time, developing the show in a series of workshops and exercises. 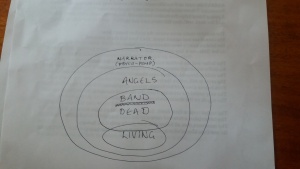 There was much learned from and created in these initial sessions which went on to inform the structure and dynamic of the show. I found this time valuable and an education although because it was intense and cloistered I remember thinking that this work could have taken place anywhere and that it was a long way to come for a rehearsal. After this period it was refreshing to get out and experience more of the island itself.

I was delighted to hear that an informal “beach party” had been organised to help us meet some of the people of Eigg. I’d say there was a fair bit of shyness to begin with, certainly on my part. I came to the beach with my guitar which is in itself a declaration of intent but I didn’t want to presume or act like we were on Eigg to show off. The informality of the evening proved to be an obstacle to overcome in that there was a feeling of people wondering what we were all doing here. My guitar case sat there on a sand dune unopened, an elephant in the room, Then, one moment occured which changed things for me. Eigg resident Nan McFee asked me to sing and play guitar with her. This made things different: it was an invitation. Nan and I played a few songs together and happily found some musical common ground (we’re both Kate Bush fans). Others joined in too and it became a sing song and the beginnings of a coming together. By the end of the night I felt we had made one or two tentative steps towards introducing ourselves. 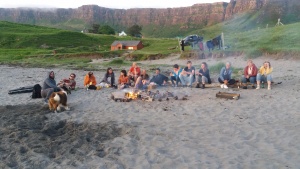 The next day our host Lucy and Nan came to visit in our barn and watch an early worshop of the show. We all shared our thoughts afterwards and at this meeting the idea was born of Nan and ourselves working together towards our “sharing” event at our next visit to Eigg.

Biff Smith toured the The Dark Carnival: Unplugged (with Vanishing Point) to critical acclaim in May / June 2019