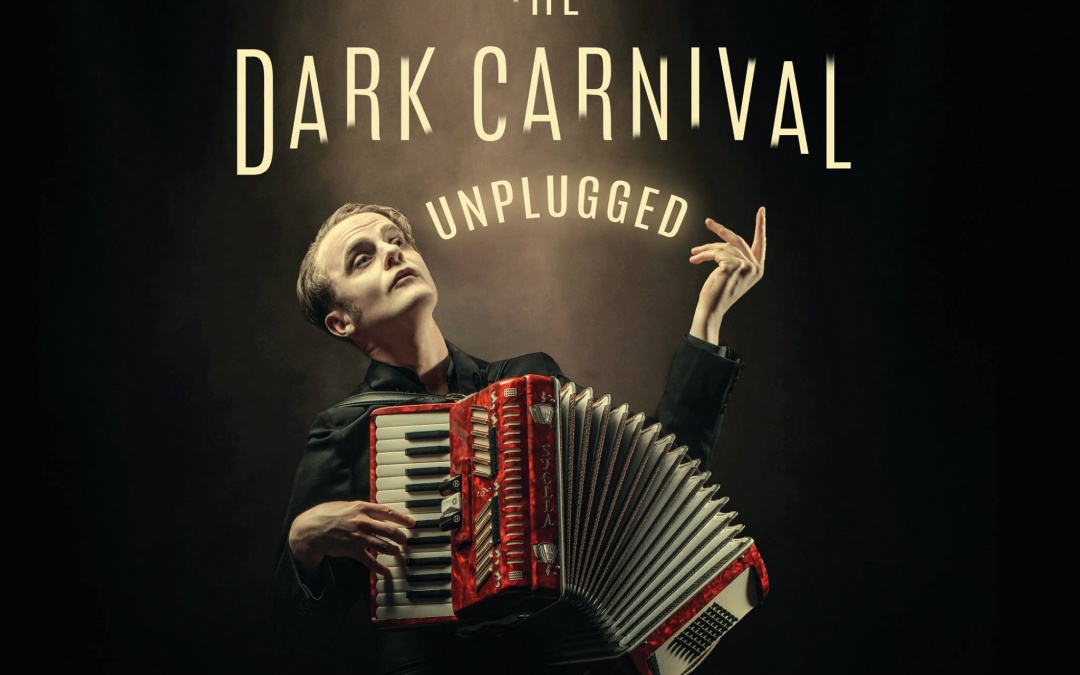 The idea of intimacy and how to make more out of less.  Ahead of touring “The Dark Carnival: Unplugged”, Biff takes us through the challenge of distilling a full scale theatre production into a leaner light travelling production all the while making a virtue out of it.

Written by – Biff Smith, A New International (performer / writer for The Dark Carnival: Unplugged by Vanishing Point) in May 2019

From the performer’s perspective, there was one immediate realisation in translating a full scale theatre production to the small version: there were less places to hide.  No band, no spectacular visuals, no large stages, no sumptuous costumes nor spectacular staging; just a minimal set and, in our case, only two performers.

Before we began, I had received drafts of the new script from Matt who viewed the new performance parameters as an opportunity to focus on the central story of the Dark Carnival: that of a briefly requited then brutally interrupted love affair between two young men at a time when such relations were, as the text will tell us, “quite beyond the pale” (even more so than in our terribly modern nowadays).  It could be argued that, in the main show, the central story had an easier role in that there was so much surrounding and supporting the narrative: the gorgeous visuals, the large cast, plentiful sub-plots and eight-piece band.  In the unplugged version the story is very much front and central and so, thus far, workshopping has consisted of toughening the text: questioning what is necessary and what is not, where is it woolly or indulgent and how can we make it leaner and travel lightly.  We must remember that we have fewer entertainments, or methods of distraction, at our disposal on this tour so we must tell our tale as lightly as we may.

As a musician, I see a musical parallel in the theatrical discipline demanded by the small show: it is almost like minimalist music in that the question is being asked

“How can we express a mood or atmosphere using as few notes as possible?”.

Obviously, it is easier to play less with fewer instruments/performers, but the questions we face are perhaps not too dissimilar in essence to those of a band or musician before choosing a set for an MTV unplugged show: questions such as, which pieces work under this discipline and which, even if they be our favourites – that all important stage of “losing your darlings”- do not?

Sad as it may be, some songs, simply do not work quite as well under such austere conditions.  This is not to say they are bad songs (that must always be the audience’s call, unless the audience is wrong, hehehe) but simply that some songs flourish better in more rarified atmospheres, with more ornate arrangements to tease out the heart within.  Like people, some songs are a little bit shy and need more encouragement than others.  Then there are those which seem to flourish in a more spartan environment.  With fewer instruments there is more silence.

This brings me to the idea of intimacy.

It is easier to be intimate with one instrument than a band; with one voice than a choir.  It is easier even if only for reasons of administration alone but with fewer sound sources, silence, and silence as an instrument in itself, is easier to achieve.  As the audiences will be aware that there is no full band or cast involved in the smaller show I would imagine and hope that, with there being less volume, there may be a greater desire to “lean in”.

It will be our challenge to work with this desire and, on a good night, perhaps even dance with it.

I am, at the time of writing, two days into rehearsals for the Dark Carnival (Unplugged) and much work, both creative and destructive, lies ahead of us.  All of the above is, of course, subject to change.  Never mind.  As Chuck Palahnuik wrote,

If we must fall apart, then may we do so in as entertaining a manner as possible.  I like people to feel like they got their money’s worth.

_________
Biff Smith (A New International) will be touring the region with The Dark Carnival: Unplugged in May and June 2019.  Highlands & Islands Dates can be found here and another super blog about the production from co-director Nikki can be found here