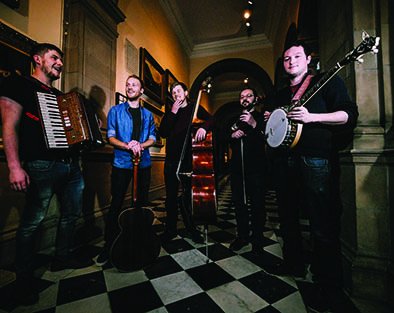 Dallahan is one of the most thrilling forces in the international folk music scene; heavily rooted in traditional Irish music, but with hugely diverse backgrounds and influences. Tender and delicate songs from Transylvania change to relentlessly punchy Irish dance tunes littered with funk grooves and everything in between. In 2015, the band was nominated for Folk Band of The Year and their debut album shortlisted for Album of the Year at the Scots Trad Music Awards

Concession Price
11
In Person Booking
There are three ways to buy tickets: (1) On wegottickets.com; (2) In the Phoenix Community Store at The Park, Findhorn, Forres IV36 3TZ, usually two or three weeks before each event (no booking fee). N.b. the Phoenix no longer takes phone reservations; or (3) Send us an email (uhall@findhorn.org) to reserve tickets that you can collect and pay for on the night. We will do this except for events where we expect a sell-out crowd  in which case we will ask you to purchase in advance.
Promoter
Universal Hall Promotions
Promoter URL
http://universalhall.co.uk/