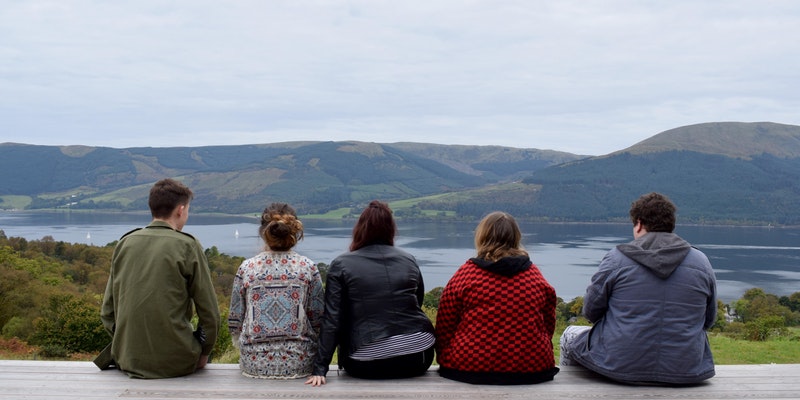 After a jam-packed summer of Go See events, our GET IN Youth Promoters had their final training weekend at Cove Park, Thu 6 – Sun 8 Oct. The theme of the weekend was The Practicalities of Programming a Tour, and we had a fully packed schedule, with guest speakers delivering active learning sessions on marketing, and negotiation skills.

The highlight of the weekend was the Promoter Pitching evening on Friday, when each Youth Promoter had the opportunity to propose who they want to programme, and why, in an informal, fun and creative way. The rest of the weekend was aimed at refining these choices, with The Touring Network team delivering practical sessions, ensuring that the youth promoters left the weekend with clear actions and timescales for the months ahead.

We have a fantastic opportunity for other promoters in The Touring Network to be part of the GET IN tour in Spring 2018, with Supported Programme bursaries available in order to do so. Check out the Supported Programme Collection in Tourbook to find out who they have decided to programme, or The Touring Network Promoters Facebook group for more info.

The summer has been a busy time for GET IN, with our Youth Promoters Go See-ing lots of events, and sharing reviews with each other. A good mixture of genres have been seen this year, including new music, techno to traditional, dance, drama, immersive theatre, stand up comedy, film and even a heritage festival embracing storytelling and craft workshops.

A number of the Youth Promoters made it to Edinburgh during the festival to see some impressive performances in August, including one GET IN Graduate who was immersed for two weeks as an Assessor for the Total Theatre Awards. She was sworn to secrecy though, so unfortunately couldn’t share her reviews with the rest of the team there and then!

Our Mentor Promoters have also been supporting the Youth Promoters between training events and they are very appreciative of their ongoing support.

You can find out more about our GET IN Graduates in Tourbook.