The Supported Touring programme was launched in the Spring of 2013 and offers a curated menu of high quality events to help promoters and performers reduce the financial risks of putting challenging and diverse work on our stages. It exists to complement existing programming, and works to bring new and exciting professional Dance, Children’s theatre and Contemporary theatre into the region; it works with promoters to widen their programming choices and attract new audiences; and it works with communities new to promoting, to increase access to professional performing arts.

“As an event, this [Alan Bissett’s Ban this Filth!] went fantastically for the Drouthy Cobbler and has shown that there is definitely an audience for theatre in Elgin. The audience was more diverse than we might have expected.” Kati Clarke, Speyside Whisky Ltd

The programme is designed to be financially sustainable for the Touring Network, with shows being offered to promoters in a variety of subsidised deals, including fixed fees of differing levels and box office splits. This allows the funding received from Creative Scotland to be recycled in a community pot, with promoters fees and box office income ensuring that other promoters and their communities can continue to benefit. For performers, the Supported Touring programme provides the security of a fixed fee, allowing themselves and their creative work to be influenced and inspired by the intimate stages that they find at the heart of our small communities. 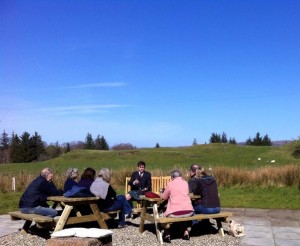 Now halfway through its second year, Supported Touring has so far seen 47 Touring Network promoters programme 30 different shows, which their communities may not otherwise have had the opportunity to see. Among those shows were 16 contemporary theatre, 10 children’s and 4 dance shows, and of the promoters involved, 51% were new or re-engaged members. So far, the following communities have benefited from Supported Touring:

In financial terms, the total Box Office takings for Supported Touring performances have totalled over £30,000, while performers have had the security of guaranteed performance fees totalling £72,500 for a total of 115 performances – an average of £620 per performance.

It’s not just the finances that we consider though. Promoters have put in over 1000 hours of voluntary time – an average of 21 hours each per performance, which certainly sheds some light on how much time is taken promoting within each community. This time pays off though, with over 3000 audience members across the region enjoying the performances.

‘What a laugh, brilliant and just right for a damp and misty evening’

‘Superb use of props! Excellent entertainment.’

Supported Touring is continuing to grow, with lots of plans afoot, such as helping promoters to start selling tickets online and to a wider audience through the What’s On guide in the newly improved Touring Network website. We are also working with promoters to secure more dance work, the least represented art form so far, to tour the Highlands, and performers are currently submitting their shows for inclusion in the Spring/Summer 2015 season. So stay tuned for more Supported Touring news.