The Hall was built in 1871 as a drill hall for the island’s volunteer force with a 7 metre high central column supporting a pyramidal roof. The column is formed from a ships mast, generally agreed to be from the 630 ton sailing ship Norval which was carrying wood from Montreal to Glasgow and sank nearby in 1870. The massive rafters are supported by eight heavy struts which radiate from the central column like the spokes of an umbrella. The instant impression of this intricate timberwork is one of eternal harmony with the island and its history and the hall is now a spectacular mix of the traditional and the modern.

“The Hall itself is magical. From the first sighting of its pyramid roof and arced frontispiece across the water to stepping off its stage at the end of the concert, it cast a spell on us. A very special place to play.” Mike Scott, The Waterboys 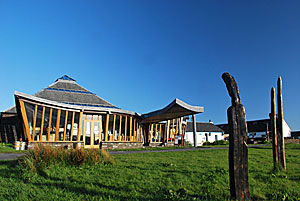