Eden Court was opened in April 1976. At the time, the design was strikingly modern. As the only large scale performance venue in the region, the building was designed by architects Law & Dunbar-Nasmith to house all types of performing arts from opera to popular music, concerts, ballet, modern dance, drama and films.

The 80-foot wide stage with a motorised centre can be adapted for different performances or moved back to reveal an orchestra pit for 60 musicians. The horseshoe shaped auditorium comfortably seats 830 or for smaller scale performances, with the upper tiers dark, it has the feel of a more intimate theatre.

“We were determined that it would not be just a good theatre but the best of its size currently being built anywhere in the world.”
Sir James Dunbar-Nasmith, architect.

The theatre is sited in the grounds of what had been the official residence of the Bishops of Moray. Built in the nineteenth century for Bishop Robert Eden, the house was incorporated into the new arts centre providing dressing rooms and offices and later on, a small cinema. It gave up its name to the arts complex and was renamed the Bishop’s Palace.

Budget constraints at the time prevented the building of a second studio theatre planned for the south west corner of the site.
Redeveloped for the 21st century

By the turn of the century it was apparent that the existing buildings were no longer adequate. Eden Court was successfully attracting visitors from all over the region not just to watch but also to take part in community events and the arts education activities on offer. It was proving difficult to accommodate all its users, many parts of the building were in need of serious refurbishment, and new legislation required better access for people with disabilities. Eden Court needed to expand and redevelop or the Highlands would lose the cultural centre it by now took for granted.

Following a major appeal and two years of closure Eden Court reopened in November 2007 as the one of the best equipped arts centres in the country. The Victorian Bishop’s Palace and 1976 theatre, both Grade A Listed, were retained and two new extensions added providing a second theatre, two new cinemas, two dance and drama studios and three floors of purpose built dressing rooms. The architects Page/ Park have successfully brought together buildings from thee different centuries to create the biggest arts centre in Scotland.

Thorough restoration of the Bishop’s Palace has brought back some of its former Victorian glory and outside, a new entrance and landscaped grounds means Eden Court ‘faces’ the city centre allowing visitors to finally enjoy the riverside setting. 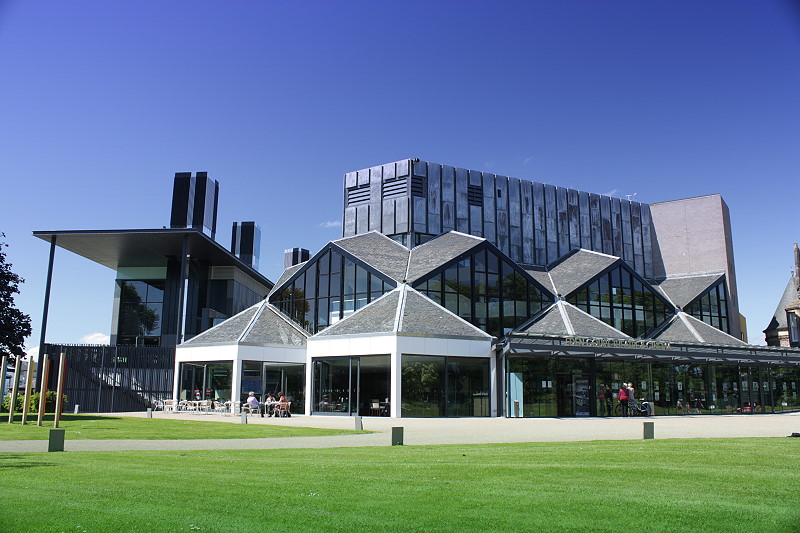